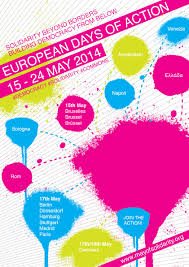 15-24 May days of action - “Europe: not only elections, but actions for solidarity and democracy from below!”

The European Days of Actions, promoted by the Blockupy coalition, begin May 15th in Brussels with initiatives against Business Europe summit.

Thursday May 15th, with the initiatives that will surround the Business Europe summit in Brussels (annual meeting of the bosses' organizations from all over Europe), will start the "European Days of Action" proposed by a call of the transnational Blockupy coalition.

A delegation from the coalition of the Social centers of the Northeast, Emilia Romagna and Marche will actively participate in the initiatives and Globalproject.info will follow live from the Belgian capital the actions the morning - launched by the Belgian coalition D19 -20 and the Altersummit - and the following appointment - organized by Trans National Institute and Corporate Europe Observatory - with the "People's Tribunal on EU economic governance and the Troika" from Thursday 14th afternoon to all day on Friday May 15th .

In fact, the appointment of Brussels is the "kick-off" of a game that, through the days of action spread throughout the continent with the hashtag #mayofsolidarity, will lead us to build a mobilization of European level on July 11th in Turin against the Summit of Heads of Government of the EU on "youth unemployment, and to prepare on a transnational scale a potential "agenda of struggle" of social movements for the fall semester of Italian Presidency of the Union.

This is the press release of the international Blockupy coalition:

“Europe: not only elections, but actions for solidarity and democracy from below!”

+ Europeanwide days of action from 15th to 25th of May

Before the election of the European Parliament social movement activists, altermondialists, migrants, precarious and industry workers, party members and unionists and many more people call for European days of action from 15th to 25th with the slogan “solidarity beyond borders – building democracy from below”.

Activities in dozens of cities in nine different European countries have been announced already.

“The EU-crisis regime is dismantling democracy and social rights by authoritarian austerity measures and the transatlantic free trade agreement TTIP. The international Blockupy coalition resists these policies during the week of action with actions of civil disobedience. We struggle in solidarity to take over the commons and to build democracy from below.”, states Hanno Bruchmann  of the International Blockupy coalition.

On the 15th of may the International Blockupy coalition will take part in the blockade of the “Business Europe summit” as kick-off for ten days of action. As umbrella organization of single national business federations, this is the biggest continental lobbying group which permanently tries to influence and condition European institutions to continue hard neoliberal politics that force the people to pay the highest price of crisis.

All over Europe we will reaffirm the widespread social opposition to the austerity policies conducted by the Troika, and indicate which financial oligarchies are instigators of these policies.

The real alternatives to the present situation are: self-governance of commons, strengthening of social rights for a more equitable redistribution of wealth. Democracy in Europe can only be built from below by the direct initiative of millions women and men, against all authoritarian and excluding measures. In the may of solidarity we will therefore fight racism and fascism, nationalism and xenophobia fueled by right-wing politicians.

In this situation migrants and refugees are among the most affected by the crisis, also because EU border regime threatens their lives by detentions and deportations, while at the same time wealth is extracted from them by extreme exploitation.

During the May of Solidarity migrants and non migrants will struggle for their livelihood, for their rights, on the working places, against institutional racism that creates hierarchies and divisions as in the “March for Freedom” of the refugees.

Moreover, coordinated transnational actions in front of many Apple-stores will protest against unsustainable working conditions and the global chain of exploitation which links workers in Western Europe with Foxconn factories in Eastern Europe and China, which are the biggest suppliers of Apple.