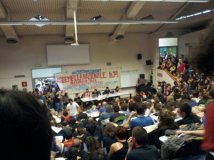 "Let's meet each others on 11th of July and let this date be a point of departure for broad processes of struggle to come."

Saturday, 31st of May, about 500 people attended, at the University of Turin Palazzo Nuovo, the first national assembly in preparation for mobilization against the EU summit on 11th of July. Among these many different networks and groups of Italian movements and activists from Greece (Antiauthoritarian movement), France (anti-ZAD) and Germany (UmsGanze and interventionistische Linke). This is the final report of the assembly:

Report from the Turin assembly in preparation of the mobilizations against the EU summit on “youth unemployment” 11th of July.

On the 11th of July the leaders of Europe will meet in Turin to decide about our future. We will be there too, to impose the voice of those in Europe who do not find any representation in those institutions, the voice of those who are indeed paying the price through their impoverishment, precarization, and the loss of autonomy and control over their lives.

Facing the drastic processes of impoverishment of increasing population sectors, the European governance responds organizing meeting like this one, with the blackmail that ties income and social inclusion to the discipline of labour and to an always larger productivity.

Instead we think that the wealth is not under-produced but that it is badly distributed, that the solution is not to work more, but to release our lives and our right to a worthwhile living from the strategies through which politicians and bosses are transforming the labour market.

To those who want to impose a top down discourse about our “employment”, we oppose a larger discourse which starts posing issues such as income, precarity, commons, and a radical struggle against the conditions to which migrants and refugees are forced.

This summit will coincide with the opening of a European semester governed by that same Matteo Renzi who reconciled all the fractions of the ruling class, all the mainstream media, presenting himself as the best pupil and collaborator of the austerity doctrine imposed by the Troika.

So it is even more urgent to widen to a European perspective the resistance front to the politics of our impoverishment. Building a vast mobilization that we would like to be transnational.

We are imaging an opposition to the Troika that subtracts itself to the powerless alternative “Europe Yes/Europe No”. An opposition that refers to a continent of becoming conflicts made of social movements practices, because the only real communitarian project is that generated by the destruction of the hierarchies that oppress us and by the re-distribution of the wealth subtracted to all of us.

To build a common path means to lay the foundations that make it possible. For this reason the assembly asked, immediately finding a general agreement, for the convocation of a general strike for the 11th of July, to allow the participation of all the workers.

A common path also means the accumulation of a strength coming from the local dimension of our territories, opening for a possibility of a new season of struggles. We are not interested in creating events, instead our goal is to activate processes, with a past and a future of possibility.

For this we will organize assemblies in our territories, meetings that could broaden the participation and the front of even more urgent enemity. This is why we chose the last week of June as the time for a mobilization that could meet in a common day of action (26th of June), choosing tangible and shared targets of struggle: banks, debt collection companies, employment agencies and media. All of these targets are now understood as a fully political apparatus.

Many other actions that will be developed on a national level will constitute further moments for launching this common path.

With the perspective of a political process in continuity with a year of social movements, let's meet each others on 11th of July and #civediamolundici (#seeyouonjuly11) let this date be a point of departure for broad processes of struggle to come.

Social movements and conflictual trade unions against precarity and austerity