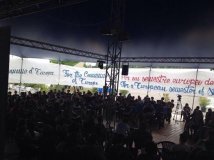 Two days ago, the government in Turkey overturned the glassware workers’ right to strike (as if it legitimately can) on grounds that it threatens public health and national security and “postponed” it for two months. The “strike postponement law” was a product of the infamous 1980 military coup, reinstated in 2012.

Forty-seven days ago, on May 13th 2014 in Soma, over 300 miners died in what the government insists on calling an “accident”, but we know there is nothing accidental in how extractivism, precariousness and privatization are keystones for neoliberal capitalism. We call it a massacre.

Two children were murdered by the state within the last 4 months. They died after being hit by tear gas canisters fired by the police during protests.

We know that our organizing efforts and practices from the bottom-up run into challenges, perhaps more often than not. But we also know that the act itself of building solidarities on the ground, of animating a different kind of life is transformatory; that it is politics itself. We never thought it would be easy. We never thought it would be pain-free. And we are far from hopeless; we are more enraged, more motivated, more experienced than ever. As Beckett said, “Ever tried. Ever failed. Try again. Fail again. Fail better”. Because we know even as we fail, we change the world.

We know that what connects us is beyond a mere affinity and that our struggles are in common. And we know that we should strengthen our ties and refresh our ways of fighting together. As Zapatistas said “Asking we walk”. It is time to keep asking, rethinking, resisting and rebuilding.

See you in autumn! See you everywhere! This is only the beginning, the struggle will continue!