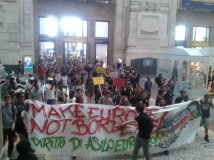 The Noborder train gets to Switzerland, European asylum not borders!

On the 21st of june, one day after the International Refugee Day, a caravan of migrants and refugees from Italian towns of northern eastern Regions, Emilia Romagna Region, Marche Region, has reached the Train Station of Milan to get to Switzerland with the Noborders train. Here they have conquered the goal to submit asylum requests without being refouled at the Swiss border.

A concrete result achieved collectively and in a public way against the daily refoulements of migrants arriving to Swizerland from Italy, who are daily rejected back by Swiss border authorities.

Around four hundred of refugees and activists have gathered in Milan train station in the afternoon and after a collective press-conference to claim for a European right of asylum and for freedom of choice, have reached the platform to get the train to Chiasso, the first Swiss town after the border. Despite the huge militarization of the platform and the attempt of policemen to restrict the access to the train, everyone managed to get on and arrive to the demo destination. Once in Chiasso, they were received by more than one hundred Border Policemen fully equipped to reject the activists of the Noborder train, who were claiming for their right to ask for asylum in Swizerland and thus enforce their freedom of movement and residence.

After having occupied the train platform with banners and speeches for few hours, the Noborder train's activists achieved their objective and managed to exit the station without showing any paper and reach the police office where several migrants made their request of asylum. Not only, thanks to collective strenght and the will to be European citizens regardless of identity papers, the caravan was able to demonstrate across Chiasso city centre, where they received hugs and greeting from the inhabitants.

After the initiative at European Embassies last 13th of june, the Nodorder train has launched two clear messages against the hypocrisy of EU Member States who will gather in Bruxelles next week to discuss about migration and asylum: we don't need Frontex nor Mare Nostrum, but open channels for authorized journeys for all those fleeing from their countries and freedom to chose where to start a new life, against the visa policy and Dublin Rule.

Following the The Charter of Lampedusa footprints as well as the Blockupy mobilisation, in support with the Protest Refugees March getting to Bruxelles, the Noborder train has made another step forward toward the making of a European space of rights, dignity and future for everybody, where solidarity, cooperation and productive conflict win against borders' and “fortress Europe”'s violence.