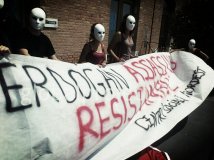 From Social Center of nordest

Tweet
This morning the activists of the Autonomous Social Center Movements of North Eastern Italy have occupied the Turkish Consulate in Venice. The goal of this direct action was to show once more, after the invasion of the Biennale a few days ago, solidarity with the struggle for democracy of the Turkish people.
This morning the activists closed the consulate, took away the official sign, threw some red paint on the walls of the building and left behinds a few writings against Erdogan and in favor of the people that for the last twenty days have been demonstrating in Gezi Park, in Istanbul and allover the nation.
Using a megaphone, the activists explained that "Gezi Park is everywhere, in solidarity with those who are fihting in Turkey for freedom, for defending the commons, for a real democracy within our Euromediterranean political space. We really feel that the struggles in Turkey are something to which we belong, like those against the ECB in Frankfut or the Arab Springs: there is a wind blowing, that of a Euromediterranean space of rights, freedom and income. Gezi Park is our home too.
The slogans and the writings left by the demonstrators denounced the violence enployed by Erdogan who decided to gas and to hurt the people in the streets, turning the city into a big red zone protected by the police and the water cannons.
"We are solidal and complicit fot a free Turkey" the activists repeated and finally the invited to multiply the actions in solidarity eith the turkish struggles.
Gezi Park is Everywhere!