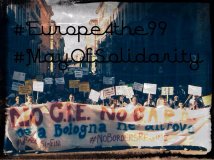 Your borders are murder! Stop migrants'detention, free movement and citizenship for all!

A strong message came form the demo held in Bologna on the 18th of may: No more migrants'detention centres anywhere! More than 1000 people shouted their voice against borders and migration regime. Migrants, refugees, coordinations, associations, self-organised trade unions, collectives and self-managed houses occupied by refugees, have underlined the connection between laws that have introduced migrants'removal centres and the massacres of migrants on the EU borders, such as in the Mediterranean Sea. “These continuous deaths are the direct consequences of a European system of migration control and selection operating both at the external border as well as inside the territory of Europe”, was said during the demo, whith banners saying “Your borders are murder. Freedom of movement for all”.

During the rally, speeches remembered the important struggles of migrants detained in the centres of all Europe, showing that people are revolting against the blackmail imposed by racist laws such as Bossi-Fini law which uses the image of the detention to threaten migrants on their way to inclusion. “This is the symbolic and cultural role played by CIE, said the speeches, but we won't accept that anymore!”

The long path of fights against the CIE in Bologna lead to a first result: the Municipality and the Region have announced their opposition against the re-opening of the local migrants detention centre which is closed since last may for operational works. An important achievement, reached thanks to the radical action of social movements and to the migrants'protests against exploitment, for the right to stay and for the right of asylum. Also the national system for the reception of refugees arriving in these months from areas of wars has been blamed, as it leaves without future perspectives thousands of people which are considered only as transit-objects. “We have to re-think a European system of asylum which grants everybody the freedom of choice”, was said in front of the Government building, where the Charter of Lampedusa was reminded as a concrete proposal to change the European system which manages people movement. The Dublin Regulation has been condamenad and a system for authorised and safe arrivals has been claimed against the hipocrisy of European and Italian Institutions in relation to those risking their live in order to flee from conflicts.

“We are the players of Europe, we build concrete and daily alternatives to your policies of austerity which lead us to precariety, poverty and invisibility”, was said at the microphone.

A day which concretely united, within the frame of #MayOfSolidarity, the struggles against austerity politics and precarization with those of migrants against the hierarchies produced by institutional racism. A solidarity without borders is necessary in order to win. From Bologna a voice raises and says: we cross the borders, here we struggle, you will not stop us!