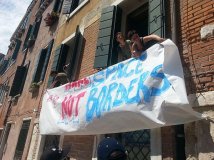 Make Europe not Borders! Greek and German consulates occupied in Bologna and Venice, demo in Berlin

HERE the Italian version with VIDEO and PHOTOS

Initiatives for freedom of movement and right of choice today in Italy. Occupation of the German Consulate in Venice and occupation of the Greek one in Bologna. Banners, fliers and press conferences inside the embassies' offices to claim the end of migrants' murders.

Against the border's managing by EU State Members which causes migrants' deaths and exploitment, activists have sent a clear message to Germany and Greece Government: ope safe channels for arrivals and abolish the Dublin Rule.

The initiative is part of a wider mobilization for freedom of movement and right of residence with actions in Madrid, Frankfurt and Berlin, within the framework of a day of action called “make space not borders”. A demo in front of the Ministery of Interiors has been held in Berlin to condemn the Dublin III Rule.

The activists have announced their participation to the Noborder Train, a demonstration to cross collectively with migrants and refugees the inner borders of Europe, which migrants have to overpass illegaly by paying thousands of euros. The Noborder train challenges the outrageous policies of reception organised by the Italian Government: “Refugees' odissey doesn't end when they menage to arrive to Italy or Greece. Here they don't find any services and perspectives, but precariety and poverty, forced to occupy empty building to avoid sleeping in the streets.” The paradox is that all the ways to ask for asylum elsewhere are blocked, as inner borders and the Dublin Rule prevent them from acces to the freedom to choose where to live.

Following the spirit of the Lampedusa Charter, many groups, collectives, occupied houses will reach Milan on Saturday the 21st of June at 2pm at the Train Station to violate together EU borders.

“We invite everybody to join us in Milan to claim that our Europe has no borders and to take part to the demonstration in 11th of july!"

Read the call for the Noborder train